To celebrate Valentine’s Day, we collected some our favourite love stories from Spark’s success couples. It’s the best part of our jobs, enjoying the touching stories of love that get shared with us – the reason why we all do what we do! We put together some of the best love stories, each with its own valuable lesson on love and heart-warming tale for this year’s Valentine’s Day.

Couple quote: “Just a week after I first stumbled on that heart-melting smile, I was coming home for the holidays and we made plans to meet in person. I remember texting a friend the night before our first date... "I'm telling you, I am going to marry this man!"

Highlight: Traci and Josh’s love story pulls on all the heartstrings, with them both knowing right from the very beginning that they had found their missing puzzle piece. Their online connection was so strong that even before meeting, they knew they had found the person they both wanted to spend the rest of their lives with. 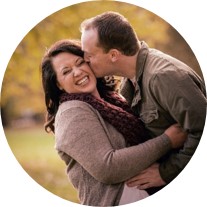 Couple quote: “On June 27th, 2018 I was going on Christian Mingle for the last time to close my account. I was frustrated with online dating. I thought I would give it one more try.  I saw a beautiful silver haired woman whose profile mentioned her strong love for Jesus. I sent her a smile, not thinking I would get an answer back. I received a smile back quickly even though this woman had just signed up and was not on often…I pretty much knew immediately it was true love!”

Highlight: Grant and Tammy’s story remind us that you really should never, ever give up. Right on the verge of giving up hope, Grant met the love of his life. Moral of the story – persistence really does pay off! 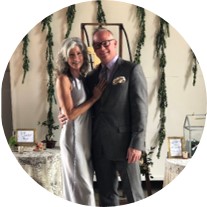 Couple Quote: “Dane once told me that his mom told him when he was growing up that one day he would meet the girl he wanted to marry and he would “just know” she was the one. He told me he used to think this was something moms just said, but that when we met he “just knew.” I felt the same exact way, recalling friends and family often times saying this to me. I just know I could not possibly ever be without him now.”

Highlight: Anna Marie and Dane’s ever-romantic tale of love remind us about the wisdom of family and friends. Sometimes it’s wise to trust the people who know us best, especially when it comes to love. Only a few months after starting to date, they were planning their engagement! 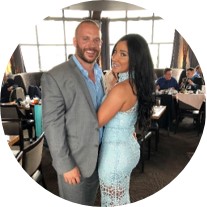 Couple Quote: Describing their favourite moment with a partner, Normand and Dina say theirs is reading each other’s minds and knowing what the next life adventure is.

Highlight: When you’re falling in love, one of the most magical moments is the synchronicity of being able to finish each other’s sentences and even know what your partner is thinking before they say it. Norman and Dina found their perfect fit when the discovered great minds really do think alike when it comes to love! 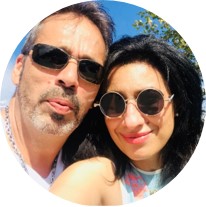 Winning the sceptic over: Amy & Jay

Couple Quote: “I had never tried online dating before and Jay was my first date. My friends were very sceptical...We haven't been apart for more than a few days since we first met in June of 2017."

Highlight: Even online dating sceptics have been won over. After never trying online dating, Amy met the man of her dreams saying, Jay, is hands down the most dependable, honest and certainly the most gorgeous man she knows. Now isn’t that pure, real love for Valentine’s day! 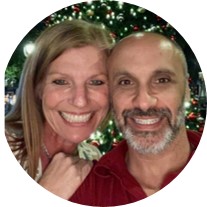 Couple Quote: “We spent the next 36 hours talking, walking, laughing, crying and eventually finally eating. She was v e r y hungry by then! We had several “dates” in that short amount of time. Julie and I found in each other what we’ve hoped for all of our lives.”

Highlight: Meeting for breakfast as their first date, Nick and Julia didn’t expect to spend the next day and a half together. Stealing the prize for perhaps the longest first date, their love story gives us goose bumps – finding the love they both had always hoped for! 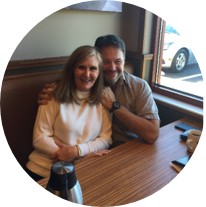 Happily ever after: Megan & Mathew

Couple Quote: This couple became "official" on June 6, 2012, right before Megan celebrated her cancer free party. Matt was able to meet many of her friends and family that day. Over the next few years, Megan and Matt became two peas in a pod and dated for 4 years before Matt proposed! Since Megan is a huge Disney fan, let’s end this story by writing, "They Lived Happily Ever After!"

Highlight: A story of resilience, hope and love, Megan and Mathew are a real-life fairy-tale. Beating cancer, Megan is an inspiration in her own right. After meeting Mathew soon after finding out she was in remission, these lovebirds are now married. Now that’s what we call happily ever after! 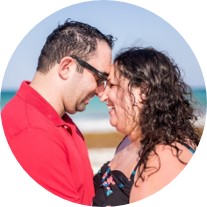 Good things come to those who wait: Lindsey & Mark

Couple Quote: Mark Wagner, a fledgling lawyer, and Lindsay Jacobson, a young school teacher, were both living in Phoenix, AZ. He contacted her on Jdate, but she never returned to the site, and in time, she moved to Los Angeles. In 2014, Lindsay wrote to Mark, never knowing if he had written to her seven years before. She hoped to hear from him, but sadly, years had passed with no response. In 2016, Mark, who also relocated to Los Angeles, wrote to Lindsay, apologizing for the late reply – 2 YEARS LATE! After a week of non-stop texting, they finally met face-to-face and began dating. After a month, Lindsay asked Mark to show her the email she had sent two years prior. “Actually”, he said, “I wrote to you in 2007. We could have had a nine-year-old child by now!” The rest is a love story with a fairy tale ending.

Highlight: In this case, patience really does pay off with Lyndsey & Mark’s love story spanning across years and state lines! It not only highlights that good things come to those of wait, but also when it’s meant to be, love will find a way. Never stop believing! 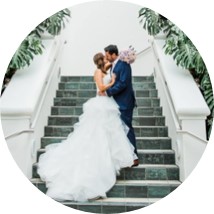 Give it your all: Jim & Elaine

Couple Quote: “When we met for the first time, it was as though we had known each other forever, because we had communicated daily for 3 or 4 weeks with talking 6 to 8 hours a day; we knew everything about each other and had so much in common, it seemed unreal. For the first date, we went to very nice restaurant in her city (I drove 5 hours to get there) and had fillet mignon and lobster tails...it was a perfect setting with a perfect couple.”

Highlight: Jim and Elaine threw caution to the wind and gave it their all, diving in head first and whole-heartedly! When it comes to matters of the heart, it pays to give it all your all. Love is not the place for half measures! 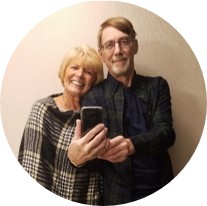 Love for all ages: Terry & Joan

Couples Quote: "We arranged to meet in neutral territory. At our age we don’t expect to feel like nervous teenagers. Dry mouth, butterflies in the tummy, acute anticipation but we both did. I had texted Joan to say I had arrived at our meeting point. She drove in. I was waiting at the door of the hotel with ‘jelly legs’. I didn’t know of course she was feeling exactly the same.”

Highlight: Love doesn’t count in numbers or measure age, and even when you least expect it, it can sweep you off your feet! Terry and Joan discovered real love is for all ages and that irresistible, giddy infatuation is not only for teenage romance! 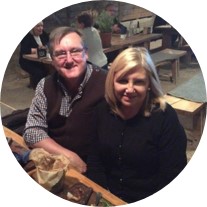